Bed & Breakfast from no-heat to oilheat

A small, family-run oilheat company in rural Pennsylvania has finished a big conversion project for one of their customers. They helped convert a big, old barn in Lancaster into a brand new, high quality bed-and-breakfast, with space heat and hot water provided by oilheat. Robert and Vivian Abel are the owners of the new Pheasant Run Farm bed-and-breakfast. They also own the farm on which the B&B is located and live in the nearby stone farmhouse.

“The Abels, who were already oilheat customers of B.G. Mellinger, really wanted us to do the heating/cooling installation for their Pheasant Run project.,” observes Carl Mellinger, service and installation manager for B.G. Mellinger. “We told them the job seemed too big for our staff: but they just would not take no for an answer. They insisted they would only have confidence in us to get it right. So, we finally agreed to take it on. 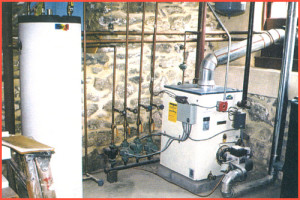 The project has been in planning and construction for three years now. We started our work in February 2000 and finished our part in October 2001. Although the bed-and-breakfast is already in operation, the project is still a work in progress.

“Design considerations for the reconstruction of the barn into a B&B complicated our installation,” continues Carl. “For instance, the owners had decided to make a self-contained living space on the first floor which they will occupy eventually, with guest space on the second floor. As a result, they built the second floor directly on top of the first floor with no joist space. Nelson Weite, a salesman from R.E.Michels, was a big help in providing the engineering, equipment and expertise to make it work.”

“Therefore, to accommodate the ducting for the heating/cooling system, we had to feed the basement and first floor from drop-space and feed the second floor from above. To supply heat and hot water, we used an oilfired Ultimate PFO-7- 60 boiler fired for a 170,000 btuh output. Domestic hot water is generated through a Phase III indirect 60-gallon heater, also heated by the boiler. Heating oil is stored in a 275-gallon Highland Tuff Tank and cooling is from an Armstrong central air conditioning system. To allow for individual heating/cooling control in the upstairs guest rooms, we also installed a Trol-A-Temp four zone control,” concludes Carl Mellinger.

B.G. Mellinger & Son, Inc. is a family owned and operated business in Willow Street, PA. They serve 1,300 heating oil customers in southern Lancaster County, PA. They employ 2.5 service people and 1.5 fuel delivery drivers. Current president Ken Mellinger is the fourth generation to operate the company, founded in 1880. He observes that “Our company policy is to be customer oriented, rather than focusing on growth or profit primarily,” says Ken Mellinger. “So far we have done very well from word-of-mouth promotion.”

Before & After of a Typical Service Job

Before unit is on the far left.